Podcast: The State of Conflict and Violence in Asia

Even before the global pandemic turned us all upside down, the world had experienced a tumultuous period of rising tension, polarization, and conflict. Across Asia, high-profile events have created the impression of a new era of instability and violence.

In 2017, extremists took over the city of Marawi in the southern Philippines, leading to five months of aerial bombardment and a bloody urban siege. That same year, hundreds of thousands of ethnic Rohingya fled Myanmar for Bangladesh following a series of brutal attacks on their villages. In February 2021, the Myanmar military took over that country and arrested elected civilian leaders, leading to months of protest and violent repression. Several months later, and several thousand miles to the west, the Taliban reasserted control of Afghanistan amid scenes of fear and chaos.

Surprisingly, however, in spite of these harrowing events, the overall levels of violence across most of Asia have trended downward in the past decade. Afghanistan is still rife with conflict, but organized violence elsewhere in South and Southeast Asia has generally declined in scale and intensity, causing fewer than 2,000 recorded fatalities in 2020, a huge drop from almost 10,000 in 2010.

Why do the figures show this trend in Asia when the rest of the world has experienced an overall rise in both conflict fatalities and the number of active conflicts or wars over the same period? The State of Conflict and Violence in Asia 2021, newly released by The Asia Foundation, delivers a comprehensive assessment, through succinct regional overviews and individual country chapters, that explains how Asian countries fit into some global patterns while also displaying their own characteristics.

The decline in regional fatalities can be explained fairly simply. The deadliest conflicts in Asia are typically subnational rather than international—they occur within rather than between countries and are usually confined to limited conflict zones. Some of the most violent of these conflicts have become less fierce since 2010—in northern Pakistan, for example, or in the Indian state of Jamu and Kashmir. In Southeast Asia, too, governments have been able to contain violent conflicts in restive regions even if they have been unable to decisively end them. 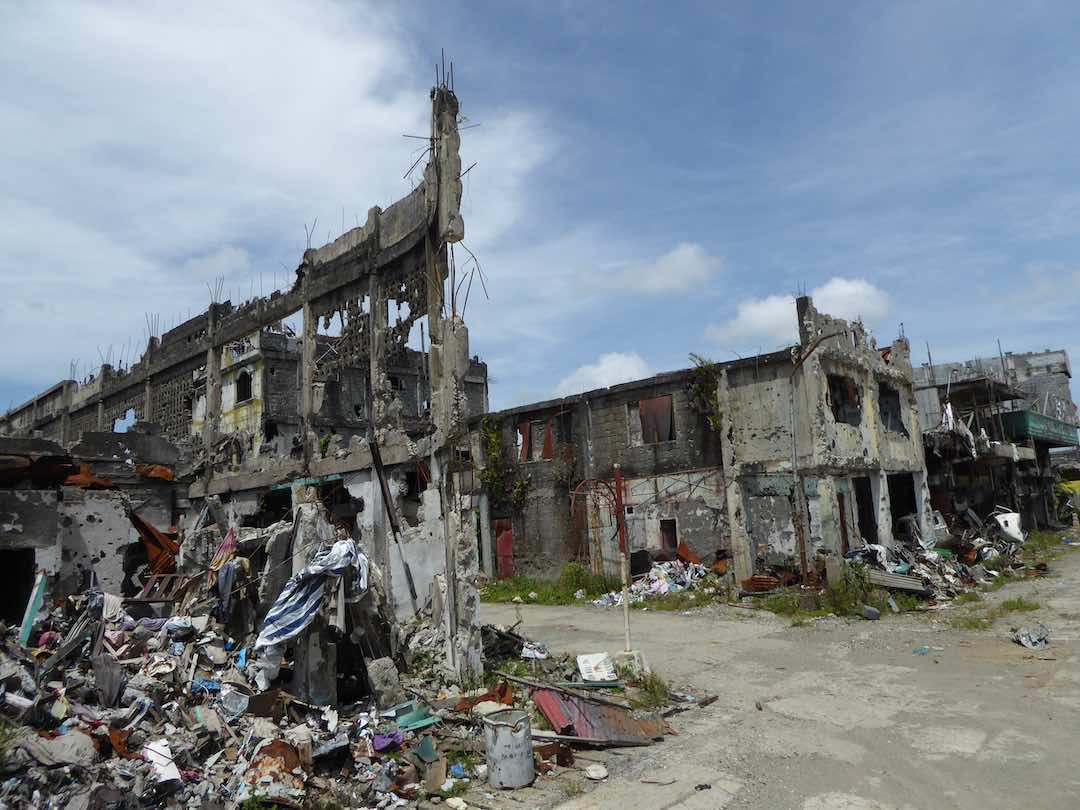 In 2017, extremists, aided by social media, took over the city of Marawi in the southern Philippines, leading to five months of aerial bombardment and a bloody urban siege. (photo: Adam Burke / The Asia Foundation)

Adversaries have occasionally agreed to negotiate peace settlements, and some national leaders have carried out political reforms to tackle the root causes of violence. Governments have also gradually expanded their reach over a period of continued economic growth across most of the continent. New roads, improved services, and more functional bureaucracies have brought new tools and strategies for pacifying resistance. Military expenditures have increased over the last 10 years, by around 41 percent in South Asia and 34 percent in Southeast Asia in real terms. With large-scale civil war mostly averted across the region between 2011 and 2020 (apart from Afghanistan) and these subnational conflicts contained, casualties have fallen even though the underlying tensions typically persist.

So, what about the patterns in the rest of the world? In keynote essays by Sidney Jones and Michael Vatikiotis, two highly regarded specialists on conflict in Asia, The State of Conflict argues that contemporary trends seen in much of Europe and the Americas—growing social or political divides, identity tensions, and the emergence of authoritarian and populist leaders—are very much in evidence.

Michael Vatikiotis observes that identity-based politics have become more common and more confrontational in Asia. Waves of violence targeting Muslim minority communities, often tacitly or even overtly encouraged by political leaders, have blighted Myanmar and several South Asian countries in recent years. In these ethnically and religiously diverse nations, the customs and institutions that maintain a balance between groups have been undermined by populist assertions of ethnic and religious primacy, and by authoritarian leadership willing to court supporters by appealing to their baser instincts. 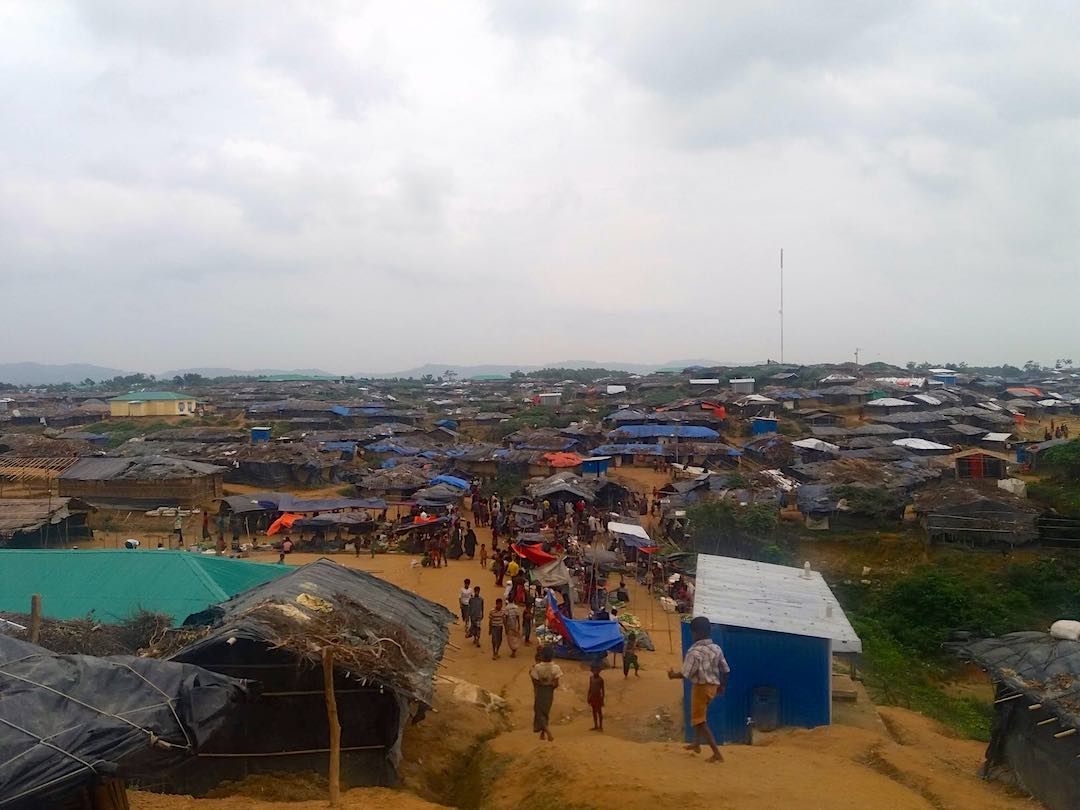 The Moduchara camp for Rohingya refugees in Bangladesh stretches as far as the eye can see, with the mountains of Myanmar visible in the distance.

Sidney Jones, in her review of identity conflicts in Southeast Asia, explains how nationalist movements have incited fears that the majority’s privileged position is under threat from minorities—religious, ethnic, and sometimes sexual. Where governments have not offered support, their impact has been limited, but when backed by governments or influential political parties, these movements have been particularly lethal.

Jones also flags the role of violent religious extremism, a term no longer applied solely to jihadist movements. ISIS inspired a small yet significant minority of Muslims in Southeast Asia to back movements for Islamic forms of government, while its regional legacy altered the dynamics of violent extremism and increased anti-Muslim sentiments.

Simultaneously, Europe and the United States have reduced their support for liberal activism and intervention overseas, while China, increasingly affluent and outward-looking, offers a more pragmatic model and a ready source of funds without finger-wagging over human rights. Reports have clearly identified an Asian trend away from democratic norms, emphasizing the authoritarian pivot.

The State of Conflict also reveals, through a set of expert interviews, how social media has polarized societies. Extremists spreading hate speech and opportunists purveying misinformation are enabled by algorithms that push users towards “echo chambers” and by tools or methods that can be used to game the system. These are major concerns in the West, but renowned Filipina journalist and Nobel Peace Prize recipient Maria Ressa explains that the problems are graver still in many Asian countries, where regulation and oversight are weak or captured by powerful interests and political leadership.

While the internet was once heralded by progressive voices as a platform for liberation and information freedom, governments have adapted fast across Asia. Templates for sophisticated control now allow for constant digital campaigns that run alongside tools of censorship to consolidate authority. 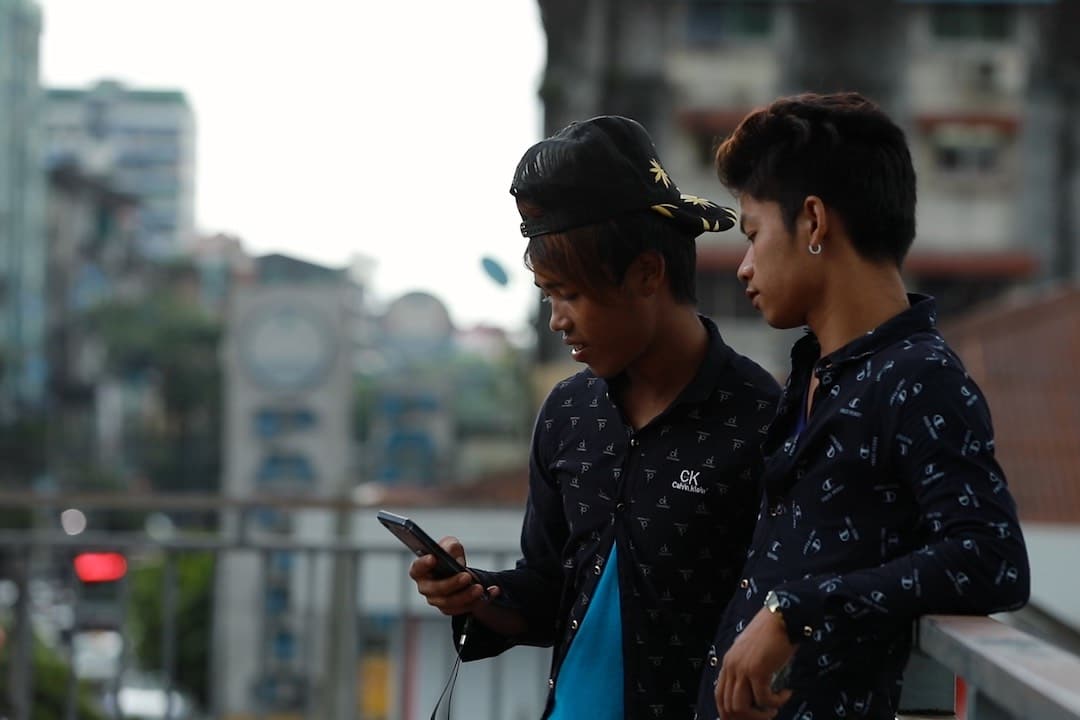 Intercommunal violence in Asia has declined, but there is growing concern about the perils of social media. (photo: Chan Myaye Kyaw / The Asia Foundation)

The steps needed to fix the problem involve responsiveness, transparency, and accountability, promoted by alliances from the local level to the global arena. It is unclear how these principles can find expression among Asian governments, who apply them partially at best.

All of these trends, though significant, are less immediately lethal than organized wars or armed clashes. They also have a limited effect on conflict statistics, because many of those injured or killed by communal violence or state oppression are either classified as victims of crime or not counted at all. Where large-scale conflicts that do make the statistics have become less violent over time, it is typically because governments have implemented tighter security measures or gained more control on the ground. These steps may reduce casualties, but they do little to acknowledge, let alone tackle, the original causes of unrest.

As imposed forms of peace proliferate, while the space for civil society and public debate is squeezed, grievances are likely to fester. The risk of violence will persist even if continually suppressed by authoritarian governments. The coming years will see further strains, given the added pressures of the pandemic and its economic fallout and the looming effects of climate change, which are only beginning to be felt.

Meanwhile, gender-based violence remains a universal crisis, thought to cause more fatalities than most wars or insurgencies. Beyond the direct physical impact, it undermines individual well-being and perpetuates structures of oppression. Armed conflict can also result in higher levels of violence against women and girls, and violence against women has repeatedly been used as a political and military strategy by militaries and other armed groups.

On the positive side, some gradual progress has been made as governments across Asia have legislated to improve the protection of women. The evidence base is improving too, and most countries in the Indo-Pacific region had completed at least one major survey on violence against women by 2019.

Evidence of progress can be found elsewhere, too. For instance, where governments have shown a strong resolve to reduce identity-based tensions—at times due to fear of losing authority or even of national disintegration—action has been taken and institutions established to manage tensions. After decades of efforts to resolve conflict, there is extensive knowledge of what works if the political will exists.

Read the complete report, The State of Conflict and Violence in Asia 2021.