Agriculture is vital to Cambodia’s economy, contributing approximately 21 percent of the nation’s GDP in 2019 and accounting for 36 percent of all employment. Rice is a principal crop, and farmers rely on it for both income and food security.

In the wet season, rice production depends on rainfall. In the dry season, irrigation is needed, but despite an abundance of water resources and many irrigation systems, water shortages do occur due to insufficient storage, outdated irrigation schemes, and poor management. The increasing severity of both extreme rainfall and drought due to climate change has also introduced stress into the system and threatens agriculture, especially rice farming.

In 2019, the Stockholm Environment Institute, The Asia Foundation, and Winrock International conducted a study of how water access is connected to poverty and gender in the Stung Chinit Watershed in rural Kampong Thom Province, using the Multidimensional Poverty Analysis framework (MDPA) of the Swedish International Development Cooperation Agency (Sida). 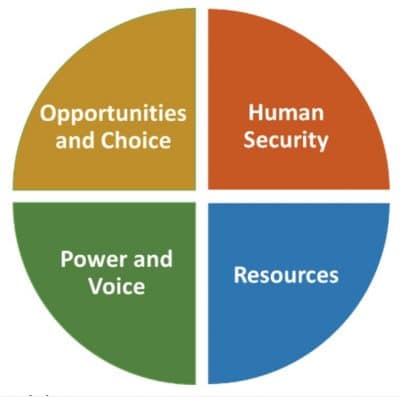 Poverty is complex and goes beyond monetary measures such as income. The MDPA describes poverty in four dimensions—lack of resources, lack of power and voice, lack of opportunities and choice, and lack of human security (figure 1).

The method used in this study consisted of linking new social analysis with a previously developed technical water-planning model. The basic premise is that including a social analysis of gender and poverty in the refined model would reveal obstacles and inequities in water access that a purely technical analysis was powerless to explain, leading to more robust solutions for improving water access for all.

The study began with an extensive literature review and key informant interviews with government agencies, NGOs, and community-based organizations, which suggested that poverty and gender affect access to water in multiple ways in Stung Chinit. These results were used to develop a survey of 812 households in the watershed??, and this survey data was then used to supplement the technical analysis of the regional planning model.

Resources: Availability of Water for Irrigation

Within the Stung Chinit watershed, where rice is the dominant crop, there are twelve irrigation systems managed by 10 Farmer Water User Communities (FWUCs). Registered by the Ministry of Water Resources and Meteorology, the FWUCs operate and maintain the irrigation systems and manage water allocations under an allocation plan, irrigation schedules, and community by-laws. 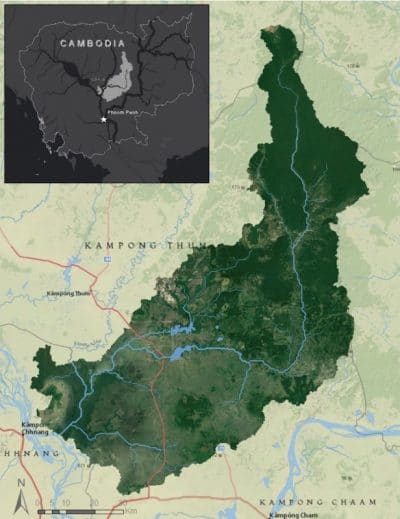 Cambodia’s patriarchal culture, especially in rural areas, retains the traditional gender roles that assign women less decision-making power than men. Men are responsible for heavy work, better-paid commercial activities, and managing water for farming. Women handle domestic work, such as collecting water for the home, which can take up to three hours per day, and caring for the family. These traditional gender norms absorb women’s time and limit their participation, opportunities, and power in managing water resources.

Participation in community decision-making is low for both men and women, but women’s representation is lower. Just 12 percent of respondents reported that their community had an FWUC, and about half of those respondents said they were members. The survey also found that men are more represented than women at FWUC meetings and that women speak up less and feel less heard.

Lack of effective communication between FWUC committees and their members is also a great concern. Almost half of respondents who were members of an FWUC said that they did not know how irrigation schedules and fees were set, and about half of households do not know in advance if there will be irrigation supply shortages. Among the other half—who said they do know in advance—74 percent said that male household heads are the primary recipients of this information.

While FWUCs assert that farmers have equal access to irrigation water and are expected to be aware of information on irrigation and to farm accordingly, the information gap between genders suggests that information may not be equally accessible to male and female farmers. The issue of communication, and the perception that men are the heads of households and the ones managing farming for economic value, could result in unequal access to, and ineffective use of, irrigation water.

The effects of climate change are also cause for concern in the watershed, affecting both water security and food security. These effects include rising temperatures, resulting in more frequent and intense events such as the 2015 drought and the 2016 floods. Most respondents said that they had not experienced food shortages in last 12 months, but of those who had, 67 percent said these shortages were related in some way to water problems such as floods and drought.

The findings of this study indicate the following:

Based on this evidence and the recommendations of this study, The Asia Foundation will pilot an initiative in the Stung Chinit watershed. The project will equip FWUCs for more participatory decision-making, improve access to information for both male and female farmers, and help them adapt to extreme weather events. Gender equality and social inclusion will be featured in all trainings, meetings, and decision-making related to irrigation practice.

You can read more findings and recommendations of this study here.

To read more about the Stung Chinit water resources board game, mentioned in this week’s podcast, please click here.